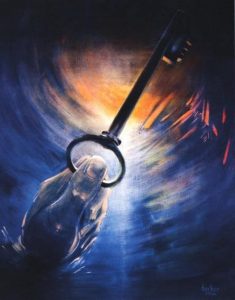 WHEN AL-MAR ALLIES WITH PRENESTE’S FIBULA, THE DARKNESS SHINES

This clue is one of the main sticking points in this treasure hunt.

This clue is decoded using the A=0, B=1, C=3 formula from the previous his clue plus a knowledge of chemical elements. This reveals a mysterious phrase that has everyone stumped.

‘The key is on the black perched ship.’

This clue has led to all sorts of theories about where this black ship is found.

When we replace the letters of the text with the numbers found in the previous enigma (B will be worth 1, C will be 2, etc …) we find a series of decimal numbers which are, in fact, the atomic masses of chemical elements.

When we replace each atomic mass with the symbol of the corresponding chemical element, we find the mysterious phrase “The key is on a black perched ship.”

Here is the detail of the decoding (from WikiChouette)

The values of the atomic masses vary depending on the source used, but the game was created in 1993, and a table using these exact values has been found.

The visual contains a picture of the key that forms part of the solution. It’s held by a clenched fist. It doesn’t appear to give any additional information to add to the solution of this clue.

The title of this enigma

The title only vaguely connects to the method of solution, a title reflecting science or chemicals might have been more approriate. Is it worth considering Max’s choice of words in case they give another meaning?

Al-Mar is the Arabic translation of the name of the Moors, who gave the origin of Arabic numerals while, the Fibula of Préneste involves the first use of our Latin alphabet. So the alliance of the Moors and the Fibula suggests, in a general way, the association of numbers and letters.

These two concepts may also suggest a geographical direction, perhaps ecing the angle of the key. Moors were associated with the Nowthwest Africa, while the Latin alphabet is associated with Rome.

Finding the key and the black perched ship is a block to continuing the treasure hunt. If this clue is not solved it seems difficult to progress to the next stage. Yet there is little consensus on what the hand in the picture, the key, and the black ship means.

Some people look for coat of arms with key or ship symbols, such as Saint-Nazaire, or Saint-Nicolas-de-Port. The motto of the city of Angers is ‘Antique key of France ‘ and this city was found in the previous enigma, the 580.

There is some connection to the ‘becalmed nave’ in the clue 600. Max gave a Supplementary Clue that said: “Born key in hand in the 600, you will find it in the 560.” This might mean that if you understand the key of this clue you will also understand how the Nave is ‘born’ in the 600.

Some people believe this extra clue means the ‘black ship’ and Nave location are the same place, though it is not clear why they are listed twice.

With just a few words we are expected to find a key, how or why it is hidden and a ‘black ship’ perched or suspended some how. It is possible there are other clues in the book that connect to this one to make the finding possible.

The line ‘The key is on the black perched ship’ or ‘ LA CLEF SE CACHE SUR UN NAVIRE NOIR PERCHE’ remains mysterious. It’s possible this cryptic clue will make more sense when other elements of the puzzle are solved.