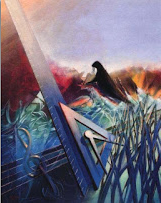 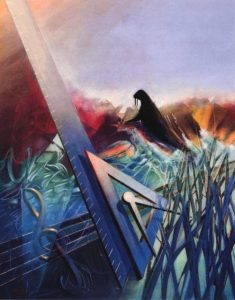 The town revealed by this clue is certain, but no one understand the Spiral.

This clue reveals the town of Carignan, and from there, at 560,606 measures we find a ‘Spiral with four centres.’ No one seems to know what this means, is it a feature on the map, or do we trace a spiral design?

The reference to the ‘Mega’ is all about the super solution or ‘mega solution’ stage of the hunt. Once all 11 clues have been solved we switch from a 1:1,000,000 scale map to the most detailed map we can find showing the area where the treasure is buried.

The title of the enigma is the first verse of the hymn of Vespers of the office of Saint John the Baptist written in the ninth century. This hymn was used by Gui d’Arezzo to name the musical notes, and music is used in this clue’ solution. More details of the hymn and a translation can be found on Wikipedia here.

Simply decoding 2424 using dots and dashes gives us NKMUANA, which is meaningless. However the music staff and clue title suggest we consider musical measures. In a music 2/4 measure, a long note is white and a 1/ 2 measure and a brief note is black and a 1/ 4 measure. So we use this concept and 2 = line and 4 = a point. This works! The decryption gives: CARIGNAN. This must be right, Carignan is a small town in the Ardennes.

Despite all this precision no one seems very sure what this mysterious ‘spiral with four centres’ means.

The clue pictures shows a walrus (or ‘le morse’) to suggest morse code. There is a musical G clef and scale with 5 lines and 4 lines in alternating colours, this suggests the musical solution to the puzzle. There is also a ruler, set square and a compass. The upper end of the ruler is not visible but the length of the image ruler is 18.5cm which suggests we are correct with a 185km calculation as this will be 18.5cm on the Michelin map. The geometry instruments suggest the drawing of lines. There is also a thicket of grass, and it seems that each clue that needs lines on the map shows these stylised lines of grass.

We know we need to measure or draw a 185km line at a right angle from Carignan. It is often assumed that a line is drawn from the previously uncovered locations Roncesvalles and Bourges to Carignan and then turning right at an ‘orthogonal’ right angle. 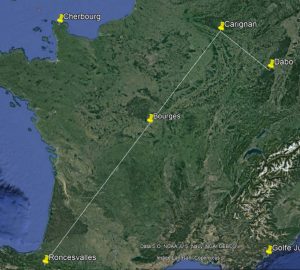 Approximately 185km from Carignan at this angle is the town of Dabo. This place has links with treasure hunting in the past and the St-Leon chapel on top of Dabo Rock has a spiral shaped path on the way to the church. 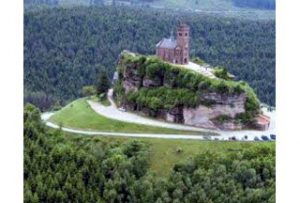 There are many enthusiastic owl hunters who believe Dabo is the ‘spiral with four centres.’ Some even think this means the owl is buried in Dabo, rather than this being another town to add to the many scattered towns on the map.

Taking a right angle the other way 185km lands in the suburbs of Lille. Not many people have an interest in this alternative location.

It’s worth bearing in mind that we don’t know if the ‘orthogonal’ is drawn from this map, or how we use the line, nor do we actually understand what the ‘spiral with four centres’ means.

My problem with settling on Dabo for this solution is that the path around the church doesn’t have ‘four centres.’

This clue also indirectly indicates the map to use for the treasure hunt, a 1: 1,000,000 scale, with a supplementary clue revealing the Michelin brand. This suggests that the accuracy of the treasure hunt and its lines on the map will be affected by the map used. I love using Google maps for the ease of moving and measuring plotted lines, but I use cheap eBay sourced old Michelin 989 maps for serious planning.

We have discovered another town, Carignan.

We need to work out what the ‘four centred spiral’ means, this can be found at the ‘orthogonal’ 185km from Cargignan. Many people believe this is a spiral path in Dabo. 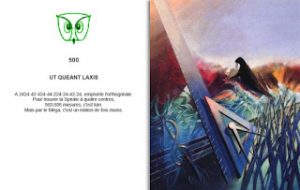