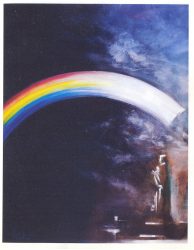 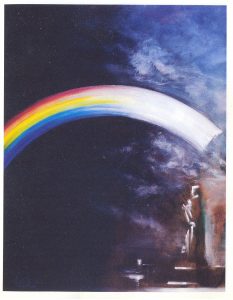 Most people seem to think this clue is completely solved.

This enigma sets the order of the puzzles. We can see that each enigma has a number and coloured owl head above the title. The number represents the wavelength colour and sorting these colours into the correct order reveals the correct order to place the clues.

In the example on the left the owl head is red. The colour red has a wavelength of 780 nanometers so 780 is listed.

Only the enigma B has no number or owl’s head above the title, it has the letter B to stand for blanc (white) light. There couldn’t be a white owl because a white head wouldn’t show on white paper.

The colours are shown on a chromatic circle on the left here, also called Newton’s disc. The puzzles are grouped in pairs because their associated colours are complementary.

The clue text for the B  enigma lists the order of riddles of odd rank and we deduce the riddles of even rank.

The order is as follows:

Le Figaro Magazine published the enigma puzzles in this order, so this solution appears to be correct. Max would have carefully controlled the way his additional clues were published.

Max has always said that this enigma only gave the puzzle order and nothing but the order.

The rainbow suggests light broken down by a prism into various colours. Max said the statue is a man, and it is most likely to be Isaac Newton who experimented with a rotating disc with segments in different colours. He famously owned a dog called Diamond, who also appears to be illustrated here. Isaac Newton’s work on prism light may be referenced by this picture.

It seems wise to assume that Max is true to his word, this puzzle reveals nothing except the order to study his clues.

There is a small chance that there is something more to understand in the title and visual, though most likely the rainbow and vision themes simply illustrate the theme of colours and light.

The title of this clue is an enigmatic, ‘He is no more blind than one who does not want to see.’ This presumably references light, seeing, and vision, yet there are many alternative ways Max could have phrased this title. Does it have some meaning?

It might also be worth noting that the concept of light appears frequently in the remaining 10 clues.

This puzzle reveals the order to read and solve the clues, starting with 530 and moving through to 520.

Enigma B madits and links

Posted on | By
‘Madits’ are the things Max said (‘Max dits’) about the treasure hunt. He answered searcher’s questions on a Minitel service (an early form of internet.) Here are some of the things he said about the ‘B’ clue. In Le Figaro Magazine (published on Friday June 27, 1997, pages 118-119) Max summarised the B clue, saying: Some selected madits on the B clue: LINKS (French) You will find more Madits on Airyn’s excellent Wikichouette site. The B enigma on Monglane’s site The B enigma on Kaspius’s site 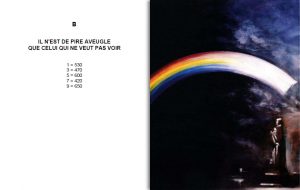