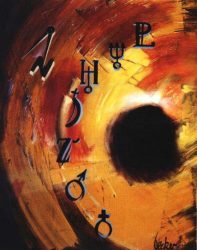 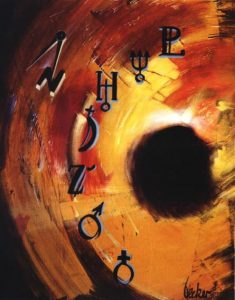 The place revealed by this clue is well known, but how do we fly and land Apollo’s arrow?

This clue reveals Golfe Juan in an enigma linked to Napoleonic history. Most Golden Owl clues use one theme but this one mixes up Napolean Bonaparte,the greek god Apollo, and the revolution of planets!

The first stage of the clue is solved with the reveal of the location Golfe Juan, but the second stage asks us to draw a line from this town and mark the place where Apollo’s arrow lands.

The text is a mix of capital letters and numbers. We need to replace the numbers with letters by matching the initial letter of planets with the planet’s period of revolution around the sun in days.

We then find this clue:

THIS IS WHERE THE EAGLE PRINTED THE MARK OF HIS CLAWS IN THE SABLE, ONE HUNDRED DAYS BEFORE BREAKING HIS BEAK AND LEAVING HIS FEATHERS.

This sentence in the original French is exactly 100 letters.

The eagle in this sentence is Napoleon Bonaparte, and the hundred days refer to the historic period of the Hundred Days, which began with the landing of Napoleon at Golfe-Juan, after returning from his exile from the island of Elba , and ended with his defeat at the battle of Waterloo. The ‘there then’ suggests the  seaside resort of Golfe-Juan near Cannes, which marks the start of this period.

To solve the second stage of the puzzle is much harder. We can assume that an arrow is flown from Golfe Juan leaving a line traced on the map, but there are no instructions about the direction.

The way this translates to almost exactly  559km suggests this must be the correct solution. However, even though we know so much about Apollo and his arrow it’s difficult to understand what Max wants us to do with this information.

The image shows seven symbols for planets in a circle around an orange and black background, it’s not clear what this represents. There is a compass planted in an N for North, is this a clue to the direction we fly Apollo’s arrow?

It’s not clear why Napoleon and Apollo connect here, it’s almost as if the two parts of this enigma were originally written as two clues. The use of planets perhaps connects to Apollo, with firing a celestial arrow skywards, and links with the Apollo space program?The number 1969,697 also has a vague link to the moon landing of 1969, as does the Eagle.

The theme of light is referenced again in the title. What is this light from the sky? Is it the sun, moon, or a star? Is it the same as the ‘heavenly light’ in the next enigma? Does the firing of the zenith arrow bring light somehow?

The compass in the visual has no obvious explanation, it is used for drawing circles. The alignment of the planet symbols also suggests a circle.

There are some missing planets in this clue. Mercury is not needed because Mars gives us a letter M, however, we would have expected V for Venus to be used for the word ‘AVANT’ (before.) There is no obvious explanation as to why Venus’ rotation of

243 days, is not used. Is ‘Venus’ perhaps a subtle remnant for the super solution?

The use of the term “trait” in the second paragraph, instead of the word “flèche” does suggest that we need to draw a line between Golfe-Juan and Dabo on the map of France. Max has never clearly confirmed this point. 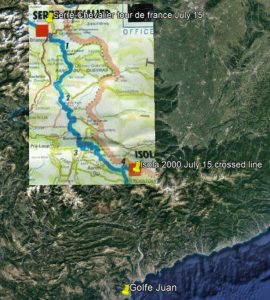 An important clue to the path of the arrow was given by Max in his Tour de France additional clues. He revealed that the Tour de France cycle race crossed the path of Apollo’s arrow on July 15th 1993. On this day the cyclists travelled from Serre-Chevalier to Isola 2000 in the Alps. So it does seem certain that the arrow flies north from Golfe Juan, perhaps towards Carignan.

The fans of Dabo have another reason to support the town, which is just a little over 559km from Golfe Juan. A path to Dabo from Golfe Juan would appear to cross the Tour de France route.

The fact there are 100 letters to this clue and the word ‘CENT’ (one hundred) is revealed rather than coded may be meaningful, or maybe Max was only playing with the Napoleonic 100 days theme?

We need to draw a 559km arrow line from Golfe Juan and it seems it flies North, passing between Isola 2000 and Serre Chevalier.

There seems to be little guidance to the exact direction of the arrow, if we believe Dabo was the Spiral location in the previous clue then perhaps it lands there?

It is not clear how we translate a ‘zenith’ upward path of this arrow into a traced line on the map. 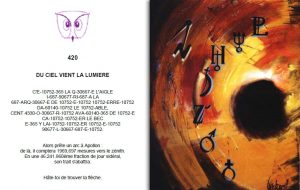