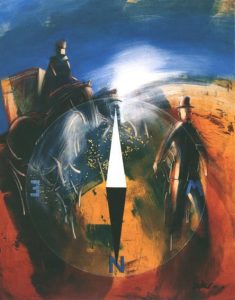 I go along with the generally accepted theory that the game measure is 33cm.

The third clue enigma 780 talks about ‘where you must by the compass and the foot.’

The ‘foot’ most likely refers to  ‘pied du roi’ , and it the word ‘step’ in the title also hints at this measure. A common value was close to 33cm.

Other ideas for the measure

The historic measure the ‘foot’ had many variations over the centuries, as this French Wikipedia page devoted to the ‘Pied’ shows.  The 74 cm foot is used by some owl hunters.