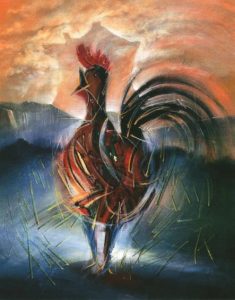 OPENING
My first, first half of the half of the first age,
Precedes my Second and Third, seeking their way.
My Fourth is inspired, my Fifth is in rage,
But, without protest, follows my Fourth and the roman alpha.
My Sixth is hidden at the limits of ETERNITY.
My Seventh, standing, spits his venom.
To find my all, just to be wise,
Because the Truth, in truth, will not be a Devin’s affair.

We discover the opening of the game is in Bourges, but there are still a few mysteries here.

This enigma identifies the starting city of the game, Bourges.

This is a simple riddle with each line revealing part of the word. Some of these answers don’t translate well to English, but I’ll do my best to explain.

Precedes my Second and Third, seeking their way.

OU où is a phrase to ask when seeing the way “où?”

My Fourth is inspired, my Fifth is in rage,

R because the air is inspired

But, without protest, follows my Fourth and the roman alpha.

G is in in rage and follows my fourth, the R, and the Roman Alpha A ;

My Sixth is hidden at the limits of ETERNITY.

E is the start and end letter of ETERNITE

My Seventh, standing, spits his venom.

S is the noise a snake makes SssS

So the opening, or starting place is BOURGES.

The cockerel is the symbol of France, and the bird is standing against the French map, with its head roughly on the city of Bourge. It appears to be crowing, symbolising the morning, the start of the day.

The main body of the clue spells out the word Bourges, but there are still some unsolved elements of this clue.

To find my all, just be wise (‘Sage’)
Because the Truth, in truth, will not be a Devin’s affair.

This phrase uses the idea of wisdom (Sage in the original French) versus divination, the archaic French word ‘Devin’ suggests a soothsayer, so perhaps the opposite of wisdom, black magic or guesswork.

The Truth, in truth is odd phrasing. It’s not clear what this means.

Max said the capitalisation of letters didn’t matter, except in the word ETERNITE. So why is this word highlighted? It could be that this is one of the leftover clues for the ‘super solution’ but it could be relevant now.

We start the game in Bourges, marking this on the map. There seems to be nothing else to do here, but it’s worth considering extra clues in the image or the last two lines of the text.