The legal status of the Golden Owl prize 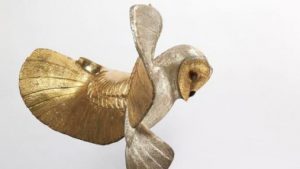 This treasure hunt was set up in 1993, and the book’s publisher has since gone out of business, and Max Valentin, the designer of the puzzle, and co-author of the Chouette d’Or book, has died.

The original rules of the puzzle state there is no time limit to the game. ‘ It is not limited in time, but will be closed the day of the discovery of the cache.’

The rules also state, ‘The Prize is a statuette of gold, silver and stones, representing an owl sculpted by Michel Becker. Its value is about one million francs. In no case can it be exchanged for its cash value.

The rules continue, ‘The book provides the clues needed to solve the riddle. The first person who has deciphered the final enigma to locate the cache is deemed to be the winner.’

A bailiff is listed in the rules, they are in charge of administering the owl game. ‘Participating in this game implies the full and complete acceptance of the present regulations deposited with Maire Frédéric LLOUQUET, bailiff, 130, rue St-Charles – 75015 PARIS.’ This bailiff is no longer active or paid for, though it’s possible a successor at the company still has some regard for the game.

There is another rule ‘Article 7’ that asks the owl finder to reveal no details of their solution for one year. This is so that Max could publish a book of solutions himself. The rule states, ‘This person (the winner) will refrain from making any statements, granting interviews to publish or reveal the solutions of riddles and the location of the cache, to report the anecdotes about the treasure hunt, and, as a rule, to broadcast any information for a period of one year after the discovery of the Owl. He or she formally agrees to reserve her statements to Max Valentin, co-author of the book.” Max is no longer with us, but it would be wise to respect this rule if the owl is found.

So, a bronze replica of the owl treasure is buried somewhere in France, along with instructions and a phone number (most likely no longer working.) It seems that anyone finding this bronze owl would have rights to claim the prize, however the owl’s status has been the subject of a few legal disputes.

The golden owl statuette was held by the publishing company, Manya, but this company went into liquidation in 2003. When Max Valentin discovered the owl’s precarious status he tried to take ownership of the owl prize. There seems to have been some secret legal dispute by Max to regain control of the prize, and from what I can understand, he didn’t involve co-author Michel Becker in his legal claim to take possesion of the owl.

The case was eventually resolved in January 2009 with the judge agreeing that the original creator of the owl, Michel Becker, should own the owl. Becker paid for the owl himself, which may well explain the judge’s decision. The judge stated Becker held the owl, “within the limits of the exercise of the right of ownership”, that is to say that Becker had to consider the rules of the game and hand over the statuette to the discoverer of the buried owl.

The story of the Golden Owl took an unexpected turn in 2014 when the treasure hunting community was shocked to discover that the golden owl entered in an auction. Michel Becker had decided to sell the prize. This sale was prevented due to legal proceedings by the AC2O. It was pointed out that the previous ruling had given Becker limited rights to the owl. The owl was withdrawn from the auction and the owl’s status was protected – it couldn’t be sold.

Michel Becker still holds the golden owl and it is highly likely he would give it to anyone who produced the bronze version, most likely without any legal case. Max Valentin left a ‘book of solutions’ revealing the location of the owl to his son, although Max’s son has little interest in the Chouette d’Or hunt, he has committed to protecting this important document.

If a treasure hunter produced a bronze owl, and a location that matched the answer in Max’s solution, it would be hard to deny the winner of the game their prize.

What to do if you find the owl?

Here’s what I think would be the best plan.

2. Don’t announce the discovery to the world, remember the ‘Article 7’ rule. It’s not worth risking breaking the rules by tweeting, “I’ve found the treasure!”

3. Try the phone number and follow any instructions left with the cache.

4. Get in touch with the owl hunting organisations. It’s a good idea to join the AC2O because they’re a great organisation dedicated to protecting this game and the best interests of owl hunters.

5. Contact Michel Becker, the Chateau 1876 organisation or the AC2O, should help, and it would be worth clarifying the Article 7 rule and checking out what will happen with the incomplete ‘book of solutions’ owned by Max’s son.

6. If there is any dispute (unlikely) find legal help, and feel sure that you have the support of thousands of owl hunters who will support your claim!

The rules of the game (French) on the WikiChouette site.

The legal dispute about the owl statuette (French) on WikiChouette.

Interview with Max’s son, detailing the Chouette d’Or solution that he protects in a safe.

Category: About the Golden Owl